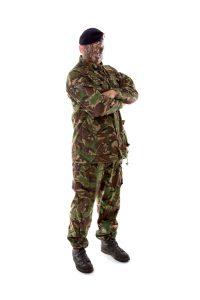 I thought that once I’d handed back in my rifle, beret and my military ID I’d ceased to be a target!  However, thats simply not the case!

“I’ve been attacked more times since leaving the British Army than the 14 years I spent in uniform!”

The cyber security industry is growing as you’re reading this. More specialists join the ranks, more malware is being launched every day than ever before:230,000 new malware samples/day according to the latest statistics. Naturally, more resources are being deployed to counter cyber attacks. That’s why I thought it would be helpful to sum up 10 cyber security facts that define the current information security landscape.

One of these essential facts is the estimated annual cost for cyber crime committed globally which has added up to 100 billion dollars! And don’t think that all that money comes from hackers targeting corporations, banks or wealthy celebrities. Individual users like you and me are also targets.

“As long as you’re connected to the Internet, you can become a victim of cyber attacks.”

On FBI’s Most Wanted List for cyber criminals you will currently find 19 individuals, each being responsible for consumer losses ranging from $350,000 to more than $100 million. They are from all over the world and huge rewards are offered for their capture.

For example, FBI’s most wanted cyber criminals at this moment are the JABBERZEUS subjects, a group of individuals involved in a wide-ranging racketeering enterprise and scheme that installed, without authorisation, malicious software known as Zeus on victims’ computers. This type of financial malware was used to capture bank account numbers, passwords, personal identification numbers, and other confidential information necessary to log into online banking accounts.

Ever wondered how much damage a computer virus can do?

MyDoom is considered to be the most expensive virus in the world and in cyber security history, having caused an estimated financial damage of $38.5 billion!

Mydoom was mainly transmitted by email, disguised as spam email. A user might inadvertently open the attachment in the email and the worm would re-send itself to every address it could find. The original version contained a payload that did two things: it opened a backdoor into the user’s computer, allowing remote control of it, while also conducting a DDoS attack (Direct Denial Of Service) against the website.

Currently there are more than 1.6 billion social network users worldwide with more than 64% of internet users accessing social media services online. Moreover, social networking is one of the most popular ways for online users to spend their time, and a preferred way to stay in contact with friends and families.  This fact alone is why cyber attackers also LOVE social media.  According to statistics there are approx. 600K Facebook account compromises EVERY DAY!

Why? Because the vulnerabilities that these types of software often present are extremely critical: all it takes is one click on an infected advertising banner to give a hacker full access to your computer.

You can go online and now purchase an  exploit kit!  and the increasing use of automation has led to more sophisticated and aggressive attacks. Without adequately protecting your browsers and your entire system, you’ll leave yourself vulnerable to a huge range of cyber threats.

“People are the weakest link when it comes to cyber security, which is why psychological manipulation of cyber attack victims is so common.”

According to the definition, social engineering, in the context of information security, refers to psychological manipulation of people into performing actions or divulging confidential information. This is a type of confidence trick for the purpose of information gathering, fraud, or system access, and the first type of attack of this kind known in history is the Trojan horse itself (not the computer virus, but the Greek mythical event).

Cyber crime is not only costly, but poses other problems as well for organisations worldwide.

“68% of funds lost as a result of a cyber attack are declared unrecoverable.”

It’s becoming increasingly difficult to detect cyber attacks and resolve the security issues created by them: the average time to detect a malicious or criminal attack by a global study sample of organisations was 170 days (according to a research conducted by the Ponemon Institute). Moreover, no industry is safe: all business sectors are affected to a higher or lower degree.

Thats why we turned to Lee Dredge at www.cybersecurebusiness.com They are UK based, and have proven to be industry leaders at protecting businesses from this kind of continuous attack! From Cyber crime, cyber attack, data hacking, data hijack and identity theft, if your on the net your at risk UNLESS you put suitable measures in place to protect yourself.